Cord Nevers and How They Impact CTV/OTT

Cord-cutting is a real problem, and it’s just going to get worse. In this blog post we’ll explore the impact of cord nevers on OTT (over-the-top) video providers like Netflix and Sling TV. We’ll discuss how these services can make sure they stay relevant by providing compelling content that will keep consumers hooked even after they cut their cords in favor of streaming options.

Cord nevers are a term that is used to describe people who have never had cable TV. These consumers are the target market for CTV/OTT services. 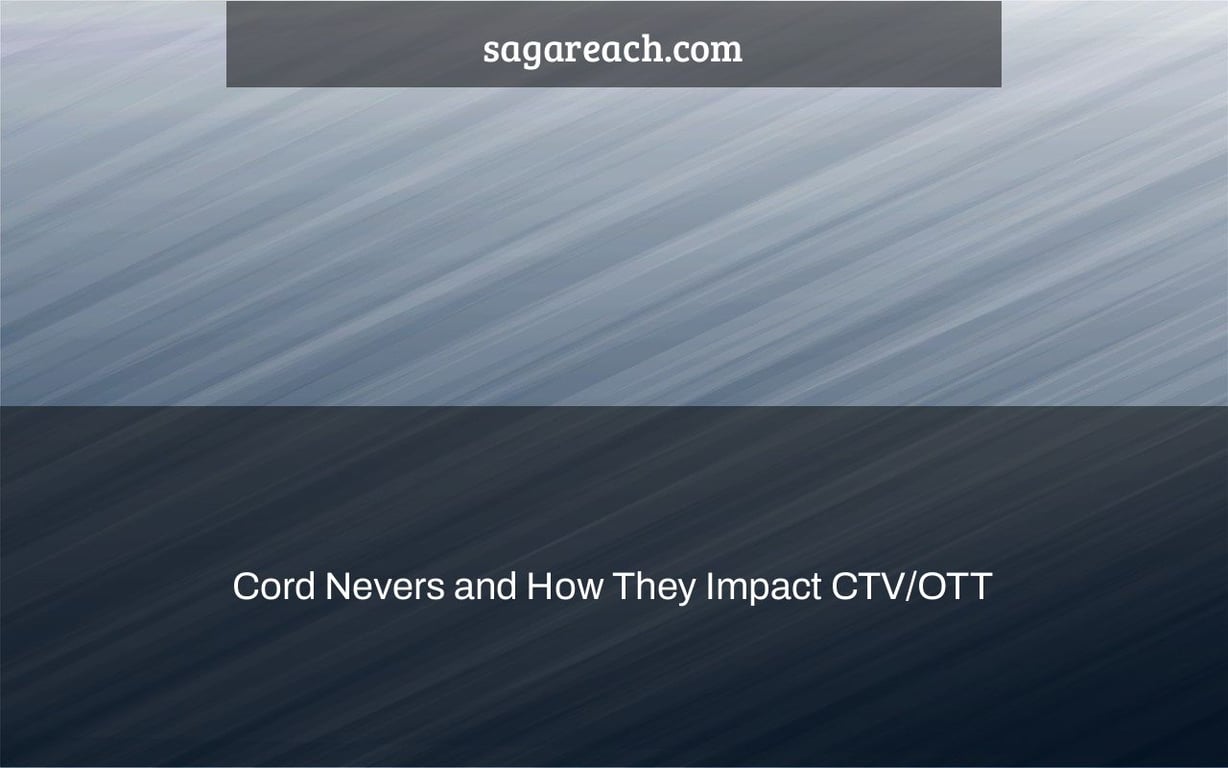 The phrase “cord cutter” is tossed about a lot these days in the era of streaming. Customers who have switched from conventional cable TV to streaming-only are known as cord cutters, but what about cord nevers?

“Cord nevers” make up a distinct group that is growing with each passing year. This changing market influences a variety of developments in the television business, especially in terms of new gadgets, services, and marketing.

Continue reading to discover more about the significant influence cord nevers have on CTV and OTT.

What Do Cord Cutters and Cord Nevers Have in Common?

Let’s start with a definition of these two television buzzwords:

What is the size of the Cord Never population?

You may be asking how significant the cord never population is.

The answer is a lot, and they’re growing in numbers all the time.

While older generations may still depend on conventional cable, millennials and Generation Z are increasingly turning to streaming-only entertainment. Simple math tells us that in the near future, these younger generations will make up an increasing percentage of the TV industry’s clients, particularly as they grow up, get jobs, and begin to live independently.

In reality, cord nevers make up over 12% of the adult population in 2019, up from 9% in 2017. The overall number of cord nevers in the United States now stands at about 31 million (and keep in mind these numbers are from three years ago). With such rapid development in such a short period of time, cord nevers are soon becoming an important demographic in the entertainment industry.

These cord nevers are on average 33 years old, with a median salary of $52,800.1 This demonstrates that younger, cable-eluding generations are maturing into adult professionals who previously had to pay for expensive cable subscriptions; nevertheless, circumstances are changing.

What is the difference between CTV and OTT?

Let’s move on to the following item now that we’ve established a clear image of who cord nevers are: OTT:2 and CTV:2

The Origins of Over-the-Top (OTT) and Cable Television (CTV)

Let’s take a look at the history of each of these services before diving into the current trends in OTT and CTV viewership: 3

The final fact is that OTT and CTV are inextricably linked, and the interaction between these two forms of entertainment has contributed to their individual success.

While cord cutters created the framework for the emergence of CTV and OTT, cord nevers are ensuring that these forms of entertainment have a long future. When it comes to conventional cable, the threat of “possible cord cutters” motivates content providers to maintain their current consumers. This might include giving discounts, necessitating long-term commitments, and adding OTT services as part of their offerings.

Traditional cable companies, on the other hand, find it difficult to acquire new consumers because of cord nevers. While this is terrible news for cable, it also open up opportunities for CTV and OTT firms to grow.

There are various ways cord nevers might be attracted in with OTT services: 5

Alternatively, there are several disadvantages to the OTT service paradigm that may determine whether or not a person would ever subscribe, such as:

OTT providers may change their streaming service subscriptions based on this information in order to optimize their audience. While these considerations may affect cord cutters and cable watchers, it is the cord never population that really appreciates the subtleties that might transform a streaming service into a home staple.

This group has become used to convenience, and firms who can provide a smooth streaming experience will be able to reach a bigger audience of cord cutters. After all, these consumers have never been bound by contracts or cable box installations, and with so many streaming choices available, they seldom make individual subscription commitments.

CTV gadgets have a unique position in a cord-lifestyle. never’s Customers may create a library of OTT services, but the CTV they select is usually a much lengthier commitment.

As a result, it’s critical that CTV businesses understand how to position themselves as the best streaming device alternative. The following are some advantages that cord cutters may seek in a CTV device:

CTV gadgets are clearly replacing conventional TVs, and they have a near-monopoly on the market as demand for streaming devices grows year after year. That said, it’s critical for CTV providers to place a premium on quality and interoperability when selling their products, particularly now that cord cutters have access to so many smart devices.

With firms like LG and Samsung making waves in the smart TV business, brand loyalty and reputation may also assist. Long-standing CTV makers, like as Roku, have reaped the benefits of getting in on the ground floor. Customers who have never used cable are more picky about the smart gadgets they buy, so it’s critical that CTV providers recognize their particular demands as time goes on.

Digital Marketing with a Twist: Assisting You in Making an Impact

Now that we understand how cord cutters affect the CTV/OTT market, it’s time to fine-tune your plan to reach out to this rapidly expanding group.

Learn more about our digital marketing services now to discover the right strategy for your company!

The “ctv landscape” is a term that has been used to describe the changing TV landscape. It’s not just about the number of channels, but also how these channels are delivered. You can find more information on “ctv landscape” here: https://www.techopedia.com/definition/ctv-landscape

Who are cord nevers?

A: Cord nevers are individuals who have never owned a TV, cable or satellite subscription. They enjoy the internet (mostly) and streaming services such as Netflix, Hulu and Amazon Prime Video for their entertainment needs.

What is the difference between OTT and CTV?

A: OTT stands for Over-the-Top, while CTV is Cable Television.

What is cord cutting in advertising?

A: Cord cutting is the term used to describe when a cable network such as HBO, Showtime, and others are no longer available via subscriptions due to their content being made freely accessible through streaming services like Netflix.